The “or” combination is studied here because of some of its irregularities.

The letter “o” is often open and angular, making it look more like an “i” as discussed in the previous lessons.

In some rare cases it looks like a “u.”

A more vexing pattern of the letter combination “or” exists when Melville writes the “o” as a foundation for the first upward stroke of the “r” and risks the “or” combination being read as a single fantastical but non-existent letter. We could also blame the overly florid "r." It is not that the “o” isn’t visible. The problem is that the eye can be drawn to the loop in the “r” and then the reader tries to read backwards and re-create the “or” as a single letter. Or a person will divide the letter “o” and read the front and back of the “o” as joined to the letters on either side of it. (If your eyes read this differently, send us a note. Not everyone imagines a squiggle from Melville as the same thing.)

Here are some examples of the variations noted above. 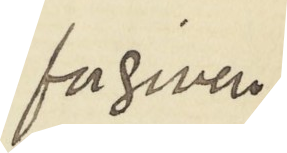